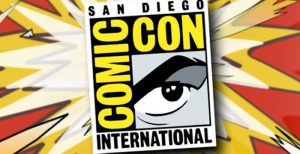 Comic-Con 2017 is here!  Twentieth Century Fox Home Entertainment will cater to San Diego Comic-Con fans of all ages and genres with the Fox Fanfare Booth. Starting today till the 23rd they will be having surprise flash giveaways including Kingsman and Deadpool vinyl albums and you can even purchase amazing items such as the Archer Most Extraordinary Spy Kit Ever.

Twentieth Century Fox Home Entertainment LLC is the home video distribution arm of the 20th Century Fox film studio and has been releasing major motion hits on DVD for years!

This year is it all about Alien: Covenant the new flim directed by Ridley Scott. The film is a sequel to the 2012 film Prometheus, the second installment in the Alien prequel series and the sixth installment overall in the Alien film series.

Today at Comic Con we will be helping to create your very own Alien pictures!

Check out the trailer above for the new Alien: Covenant and don’t forget to tweet us about your time at the event using hashtag #foxsdcc and #digitaleventsinc!